Gaming has always been something social in my family; if you wanted to be alone, you opened a book. Everybody gamed, so we would often watch each other, talk about games, and reference them. If you’ve never laughed while family members jokingly toss Insult Swordfights at each other, you’re probably missing out. What this also means is that my memory of moving to Clarksville, Tennessee is quickly followed by a memory of a few more things: receiving my own computer (there were two family computers already), and having my mother introduce me to two BBSes. The first one’s name I can’t recall, though I do remember the SysOp’s son came over once and we were supposed to make fast friends–it was an awkward event, to say the least. The second was called Nifleheim, and was host to people I would come to know quite well, though mostly by their handles.

What I recall specifically about this time period is my earliest click! moment, when the part of me that would snuggle up with feminism started coming alive (there was another, larger event later in life, but it doesn’t have anything to do with videogames). There was a chap who went by Elvis Hitler who attempted to explain to my mother how she would be rubbish at the BBS game Trade Wars. 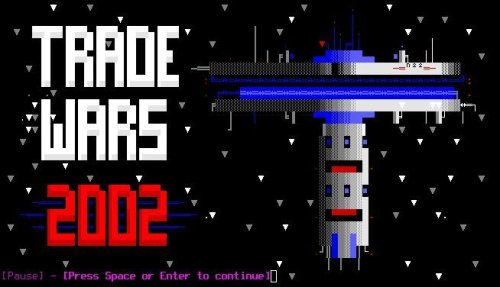 The splash screen for Trade Wars. The title, "Trade Wars 2002" scrolls down the left-hand side, while a space station hovers right.

There were a number of reasons her female mind wouldn’t get it. It was sci-fi (my mother still recalls standing in line to see Star Wars in the theater). There was a lot of math involved. Not only that, but it had to do with economics. Then, that ever ‘scary’ word of strategy cropped up–after all, all the great generals in history are men, or some such tripe. Oh, and women just weren’t as good at gaming as men.

From my view point, and I was likely eight at this time, these all seemed ludicrous claims. In an era before GameFAQS and online guides, I had my very own hint hotline known as my mother. Every game I played was one she had played previously, and could help me in any spot that might trouble me. The fact that she might not be good at a certain type of game because she was a woman never entered my mind–she was a gamer, my mother, and therefore I assumed all people were capable of gaming–it was not divisible by sex.

What ended up happening was her using a different handle to play the game, and her purposely hunting Elvis Hitler to demolish his trading capabilities, along with his ego. I’m not sure she planned on it, but this resulted in his coming over and divulging various secrets to her. “Whoever this new person is, he’ll never find my planets in this sector!” My mother, approaching thirty, and having handled sexist asshats on two continents at this point, had played mum to his explanations of how she was an inferior gamer. What she had done was declare war without letting the other party know–much as he’d already done with her. 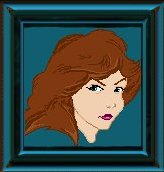 A character portrait of Arlana, my mother's character in The Realm. A white woman with a brown mane of hair.

My mother is a social gamer. She always has been. There have been stories of playing Donkey Kong in arcades with girlfriends. BBSes. The Sierra Network. The Realm. UO. Diablo. While she certainly enjoys single-player games, being a social person at heart, it wasn’t hard to see why we eventually had three computers with modems and four separate phone lines in the house, and many, many LAN-playable games. It wasn’t always necessarily playing with other people, as she has little patience for people who don’t understand the game as well as she, but having the ability to talk to people in game.

As MMOs have marched on, however, I’ve noticed a trend that was established quite some time ago. My mother only plays games where she can solo if she desires. She very carefully chooses her parties, unless completely impossible. One of her last frustrating moments was when a PUG member declared something as gay, at which point she declared quite firmly that she was a mother to a gay son, and that some people needed to stop typing.

My mother is approaching fifty. There are no signs of her giving up gaming at any time in the near future, or ever. When discussing Dragon Age: Origins, she grins as she confides that she found it a challenge to deflower the virginal Alistair. Talk to her about The Sims and she could go on at great length why the third installment’s move away from being friendly to community mods has ruined her interest in the series. At this point, most of her gaming is done within the confines of Facebook.

I kept contemplating it as I watched her play. She would pop open four different windows (she despises tabs for some reason), cycling among them while their various timers kept spinning onward. Her line of work is online, so she has a huge swathe of followers who gladly play these games with her. In effect, she has jettisoned most parts of MMOs that began to annoy her:

At this point, my mother has been playing MMOs and online games longer than most people I’ve met. Rather than continue to suffer the toll of being a female gamer in an environment that still seeks to estrange a veteran, I can hardly blame her for creating her own games with their appropriate boundaries out of what’s available.

As I look at my recently born niece, I can only hope I can affect a change to where it will be easier for her if she follows the family hobby.

Writer interested in intersectionality, games, comics, nerdy stuff in general, theater, and how it all mixes. Graduate of Wabash College, with studies in Theater, English, German, and Gender Studies.
View all posts by Denis Farr →
This entry was posted in Community and tagged BBS, Facebook games, family, The Realm, Trade Wars. Bookmark the permalink.