The cover of Half-Life 2. It states the name of the game at top, with the central focus being Gordon Freeman, a white male in his mid-twenties, wearing glasses, sporting a vandyke, and having short-cropped brown hair.

I’ve mentioned before that I often see playing games as a performance–not that I necessarily make up my own character from scratch, but inhabit the life of one while building his or her backstory. Between Portal and the Half-Life series, Valve seem to be experimenting with how a player interacts and responds to the character he inhabits. At least, this is how I would interpret having characters who say nothing–they want to give you a character as open as possible to your interpretation, so you can perceive your actions however you want. Is Gordon a nice guy? Is he shy? Does he have anger management issues?

It’s really hard to tell, and the game seems to want to acknowledge that in some sense in Half-Life 2 when Alyx states, “Man of few words, aren’t you?” This also highlights for me the difficulty in playing as Gordon Freeman and having the game make certain assumptions about me. On the one hand, it has a very open approach to my personal reactions; on the other, it presents Alyx as a love interest. Now, this is not to say I want to ‘act’ out Gordon as gay (I’ve been on the stage, and any time I was romantically involved, I was straight), rather to state that while I have plenty of agency in the world to bring down injustice, I have none to interact with my fellow humans. Which is where Half-Life 2 starts budging against immersion, and making me aware of my limitations.

Contrast this with Portal. There is a strong connection fans have had to the companion cube–an object for which we have a lot of responsibility. There is a constant interaction with said cube, and while its destruction comes without a choice, it comes at our hands. There seems little of that between Gordon and Alyx, which makes the moments when it does occur stand out (the hug I mentioned in the Alyx post, for instance). By interaction, I do not just mean touch, but the one-sided conversation is also distracting.

Half-Life thus far has been a game that excels at communication with the environment around you, as well as its feedback to you. While I do not think that the game needs to start implementing dialogue choices a la BioWare (in fact, that sounds like a tremendously bad idea, despite the fact that I’m a fan of them), having a character who is so blank is difficult in a world where there’s so much human interaction.

Which, seems to fit in well with what we do know about Freeman. Consider that in the first game it seems he is a fairly new employee at Black Mesa: twenty-seven years of age, with a doctorate in theoretical physics from MIT. His ability to interact with people whom he probably hasn’t known long during a life-threatening situation likely isn’t that strong, mimicking our own state of confusion as to what’s happening. In that game, we are told nothing concrete until its conclusion, which means we are left to surmise and assume. Then he’s frozen in a stasis for at least twenty years.

The amount of dissonance that exists for someone who enters a world he cannot really recognize is theoretically what we experience when we turn on a game. We are presented with a world that relies on our basic assumptions, but the finer details of the world, as well as the politics and culture of its people, are something for us to discover. As a player, we are allowed to engage with that material at our own pace by turning the game on and off, saving, and coming back to it. Which I feel is similar to what this world must now be to Gordon. His silence speaks more to his inability to express himself in anything but heroics.

Gordon is a tool: of the player, resistance, G-Man, and forces of which we have no idea yet. He isn’t wholly humanized, as I’ve argued in previous posts. It would be difficult for that to occur. At the same time, he has more history than Chell (as of right now, we’ll see when Portal 2 releases). Even from the start, we knew his age, his field of study, and various other, smaller bits about him. He is a character, and has a story. He is not a blank slate.

The difference is, while we can have emotional reactions, that silence is a key for us, as it also expresses frustration. To me, playing Gordon Freeman was a lesson in frustration at my inability to have any effect on my world but by force. In contrast, there are references to my building a new world with Alyx, the insinuation that children would be in our future. As yet that cannot be a reality, as I, Gordon, lack any way of communicating with Alyx beyond my actions on the world. Even when her father is being killed, I remain powerless. In the face of G-Man, I remain powerless.

Sean Beanland, in previous comments, stated that he finds it difficult to imagine Freeman remaining silent in the coming Episode. At this point, I believe if he were to do so, it would mean Gordon remains alienated from the world he inhabits. To be able to only interact with your world through its enemies and environment spells only half of a person’s worth. It is the equivalent of sending out a soldier to do nothing but be a hero, and never allowing him to reconcile himself to becoming someone whose life does not revolve around such. It speaks of someone who cannot live in the world he has saved, a world whose characters do have warmth and empathy, and are fleshed out, rather than being metaphors for ideologies. It speaks of an ultimately tragic ending, where we pity the person we’ve become. 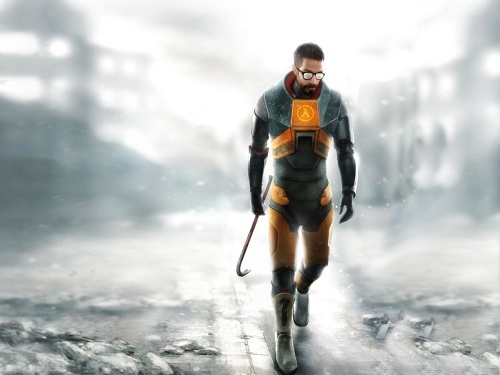 Gordon Freeman in his HEV suit, carrying a crowbar in his right hand.

Perhaps that is Gordon’s lot. I would hope otherwise, however.

Writer interested in intersectionality, games, comics, nerdy stuff in general, theater, and how it all mixes. Graduate of Wabash College, with studies in Theater, English, German, and Gender Studies.
View all posts by Denis Farr →
This entry was posted in Character Analysis and tagged Gordon Freeman, Half-Life, Half-Life 2, Portal, theater, Valve. Bookmark the permalink.