The world view the writers of Dragon Age espouse is quite fatalistic. In their world, power does beget responsibility, and people normally manage to abuse it. Kings, queens, humans, elves, Qunari, Andraste, etc. It’s all a big battlefield of power where people are exploiting each other left and right (though not equally, as issues of privilege are explored in the series). Then, there’s not just mages, but blood magic.

First, there is the mages’ lore page over at Dragon Age 2’s own website, which describes the Blood Magic specialization as such:

Nothing inspires as much wild-eyed terror as the Blood Mage. Mages of this type take the raw energy of life and twist it to their own purposes. They can corrupt and control, and sustain their power by consuming the health of others, willing or not. The effects can be vile, but this specialization isn’t limited to madmen and monsters. Many see it as the only form of magic that is truly free, because it’s tied to the physical, not favors to spirits or demons. It remains an undeniably violent and self-destructive discipline, however, and the Blood Mage must be careful. The temptation to take just a little more is always there.

Zel Hawke stabbing his staff into his chest.

Outside the Tevinter Imperium, access to blood magic seems to be most easily gained from demons. In the first run of a Dragon Age: Origins play, one can make a deal for the secrets of the specialization by making a deal with the demon possessing Connor in Redcliffe. Presumably, Hawke could have either learned it from her father, or other blood mages in Kirkwall. Merrill also gains access to it via a deal with demons.

Blood magic doesn’t have much to do with demons outside of the method of obtaining it, however. As it does not rely on the Fade, as the lore states, it is the one school of magic that is purely reliant on humankind’s own life force and power–and is much stronger for it. Comparisons are often made in the measure of a room full of lyrium or the life of a slave can provide the similar amount of power.

A recurring sentiment right now seems to be that many would feel sympathy for the mages, if it weren’t for the prevalence of blood magic in Kirkwall. The issue is, again, not the use of blood magic, but what that magic has the power to do. Zel Hawke never actually used the possession skill in the tree, using it instead to damage foes directly, and gain access to a mana pool based off his life force. Curiously, Merrill also never gains access to the spell to possess and control enemies.

Therefore, blood magic is a tool like any other. The ways in which Zel Hawke used it were no more damning than hurling a tempest of storms at them to blast them into exploding bits of flesh. There are other mages who don’t use it in a wholly negative manner, and it’s their use that helps explain how the question of whether or not it should be used is trickier than it may at first appear.

Alain, for instance, can use it to awake whomever the mages have kidnapped in Act 3. Beyond that, he isn’t seen using it in any negative manner. You first encounter him when he’s terrified of its uses, and the fact that he’s learned it at all seems a testament to the power struggle for self-defense against the Templars. Yet he never uses it against people.

Gascard DuPuis does have shades and demons who attack you, but blood magic is not required for such magics at all. Instead, he uses blood magic to track down Quentin, who does use it. He is using blood magic to combat one who uses such for harm, though not taking it to the same extremes. If you allow him to bring you to Quentin, he can fight on either side, depending on how you approach the situation.

Merrill’s situation is complicated because she never uses blood magic in a way that can be seen as harmful. If allowed to construct the eluvian, she will eventually go back to confront the demon, only to find Keeper Marethari has taken the demon with whom she previously made a deal inside herself, preventing any further contact with Merrill. Merrill never gets to the stage of doing something horrendous, and it’s hard to say if she ever would have.

Ultimately, there is also Hawke, depending on how you play her. 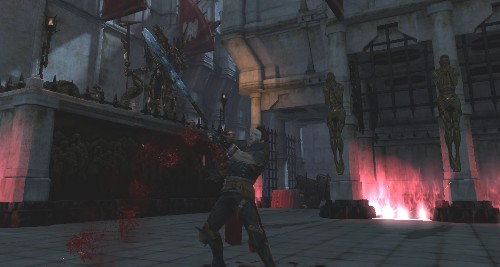 Zel Hawke removing the staff from his chest to see an outporing of blood spurt out.

There are people who can use blood magic and not do horrible things. Blood magic is also not required to do such: Anders is adamantly against blood magic’s use, yet blows up the Chantry. The tools exist in varying fashions, and it’s how we use them that counts.

Which is why I was confused at Orsino’s seemingly sudden turn at the very end of the game. On replaying the game, however, I was curious to find that in the quest where I’m tracking Quentin, there is a note that talks of how his research has been aided by the Circle, signed with -O. What it shows is that Orsino was allowing the study of blood magic the entire time, but that he was short-sighted in seeing the consequences for his own actions.

That’s the difficulty of power in any situation, and the one this school of magic brings up for us to examine. We can use a devastating force against our enemies, but depending on its application, and what we sacrifice to gain that power, we end up damning ourselves. Zel Hawke started off as selfish, and when his fortunes improved, he became a beneficiary of people in lower classes. The plight of mages was personal, and affected both he and his lover. He still used blood magic. The game’s own systems require no inherently evil task in using it, showing that in the larger world of Thedas, its use is not inexorably tied to evil acts.

However, Zel never used blood magic in a way that was worse than any other tools at his disposal. In that way, his fight against Orsino made all the more sense, because he was a gate of that power used for the wrong purposes. Even his cousin from Origins, Aeazel, eventually stopped using the power for his own means, fighting a Tevinter mage, rather than allowing the room of slaves be slaughtered to give him power. This then means we need power to check power.

Given access to such tools, I believe it’s a wonder we don’t see more mages resorting to it. The question of blood magic then becomes a curious example of the oppressed being able to be the oppressors. This does not have to be the case, but if the Templars are so willing to stamp it out, they reflect the world of Thedas, and what it knows is possible not just in the Tevinter Imperium, but in the hearts of people with no access to magic; the same people who try to instigate wars against the Qunari, leave kings to die on the battlefield, or force elves into ghettos.

Writer interested in intersectionality, games, comics, nerdy stuff in general, theater, and how it all mixes. Graduate of Wabash College, with studies in Theater, English, German, and Gender Studies.
View all posts by Denis Farr →
This entry was posted in Dragon Age 2 and tagged BioWare, Dragon Age 2, mechanics, world building. Bookmark the permalink.